Teaching You What School Does Not 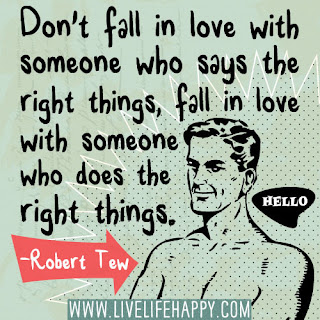 13 Things You Should NOT Do For Love

Many of us can say that sometimes we would do anything for love.


But when is it OK to do something for love, and when isn’t?

When you're in a relationship you often think that you would do anything for that person, but we should be very careful of what we do or don’t do for that person we claim to love.

Things we should NEVER Do for Love:


In a relationship everyone should be free, each person must have their own tastes, their own friends, their own activities, desires, etc. A couple should complement, support, help each other, and not be changed or forget who they are.

Many times we think about the "love" we have for that person because we are fools. In this list there are many things that many of us find it hard to do, or not to do. Why? Because we think we love. Why do I say we think we love? Because true love doesn’t hurt. True love, that’s mature and truly genuine doesn’t hurt, and it’s not the cause of constant fights. No changes are required of you and you don’t need to stop being who you are in order to please that person.

And that's a thing that is very hard to swallow, because when one spends a lot of time with a person, you want to make it work, I say this from experience. You want everything to be right, you want to please them, and when we are constantly fighting with your partner, and they keep asking us to stop doing this or that and we try and try with all our might to do so and make our partner happy with us and accept us and even though we try so hard to please them we are never good enough. What happens in this case is that this relationship is not compatible. And many times we stay in it because we have invested so much time in it, or because we have children, or because we came to believe that we're the ones making the mistakes and we think that if only we could change, that person would love us.


But we are only fooling ourselves.

Keep in mind that for the wrong person, you will never have any worth, but for the right person, you’ll mean everything. Just as you are, without having to change.


Do you think that there are exceptions to this list?

Have you ever found yourself in the middle of one of these situations?

What was the result?

Tell us your story.

Posted by LVH Productions at 7:19 PM

Email ThisBlogThis!Share to TwitterShare to FacebookShare to Pinterest
Labels: cosas que no debes hacer por amor, things you shouldn't do for love

Translate Into ANY Language